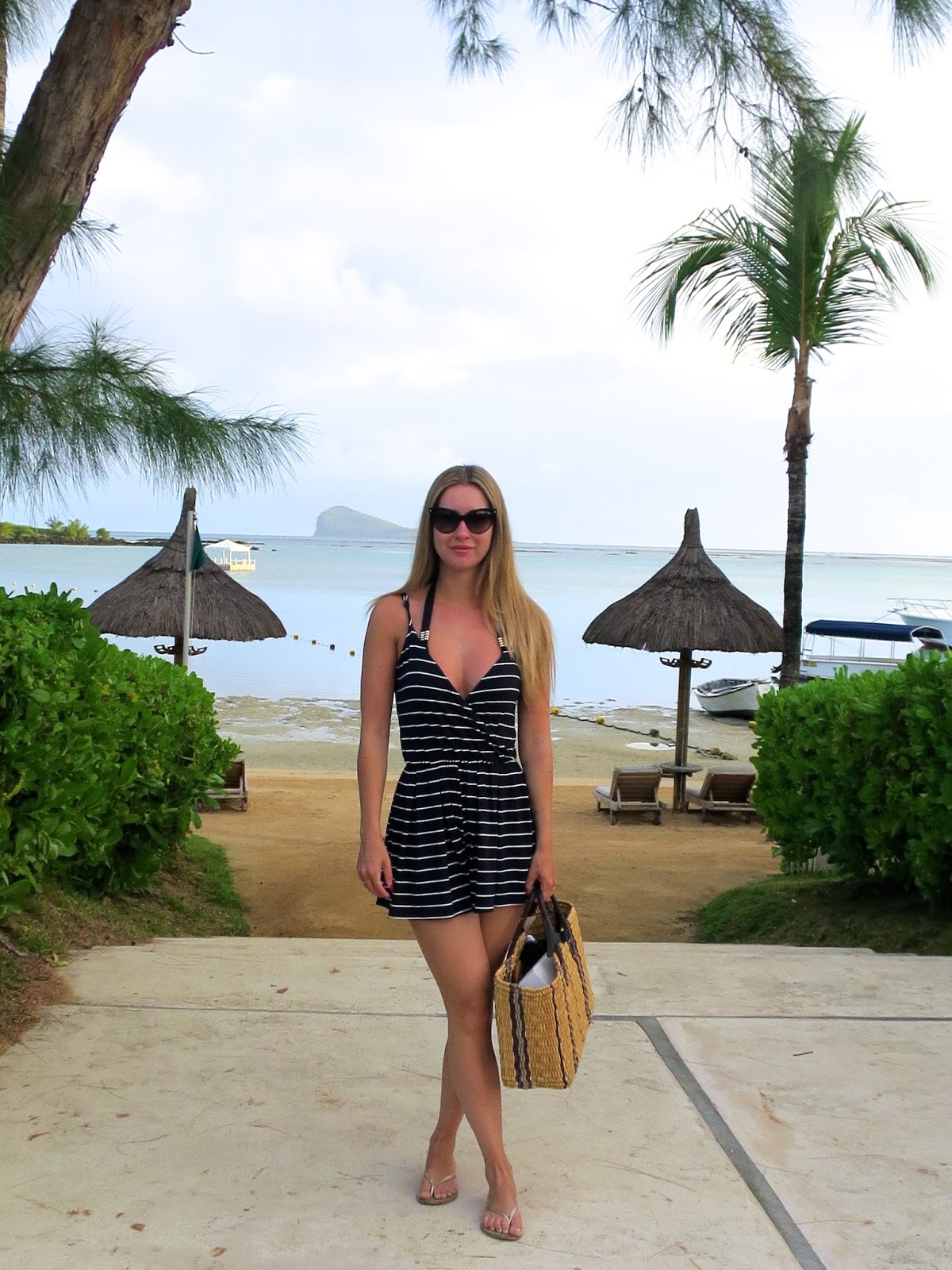 A bit of a random post today. I like to think of it as better late than never! I was skipping through our photos from Mauritius today, and came across a bunch from our fishing adventure and it brought back lots of funny memories. Funny memories now, but at the time, not so funny!

I thought I would include them here, mainly to look back in years to come and have a bit of a giggle.

So my boyfriend enjoys a bit of fishing, and during our holiday in Mauritius, he got talking to one of the waiters who told him that there are fishing tours on the island that take you out in a boat with a high possibility of catching a marlin. He went on to tell us how he’s witnessed boats coming back with the marlin presented on the boat, with crowds cheering on the beach as it approaches. Now, I have no clue about fishing so was completely blind to how amazing this opportunity is to somebody who loves fishing. Apparently, marlin is extremely expensive to buy in Mauritius, so anyone who catches one is pretty much a local hero. From that moment, he would not stop going on about booking a fishing trip and wanted me to go with him.

Long story short, we ended up booking the trip, thankfully also with a lovely couple who we met at the resort who we ended up spending a lot of time with. Us girls refused to go at first, telling the boys to go on their own and we would spend the day at the beach instead. This sounded bliss! However, the boys sold the trip to us with the promise of a large boat where we can sunbath on the deck whilst the boys deal with the fishy business out the back. They went on to tell us that a BBQ was included, along with drinks and snacks. I must admit, after picturing myself lounging on the top deck of a boat, munching on a BBQ and the thought of many Instagram opportunities (come on, who doesn’t), I was sold!

The day before we were booked to leave, we were talking about the fishing trip to one of the waiters, who warned us how choppy the sea is. We thought he was joking at first, but he was deadly serious when explaining how dangerous it is and how you have to hang on for dear life. Great. I was already worrying about feeling sea sick even on calm water, let alone choppy! We instantly went to the nurse on resort who gave us some sea sickness tablets. She told us to take one the night before, and one the morning of the trip. The packet was in a foreign language so this was the only information we were given and we all did what we were told.

The morning of the trip arrived and we were picked up by someone from the company who we booked through at 7am (ouch), and taken to the harbour to board the boat. I realised in the car that I’d forgotten to take my sickness tablet, so stupidly took two instead of the recommended one in the hope it would kick in quickly before we got onto the boat. 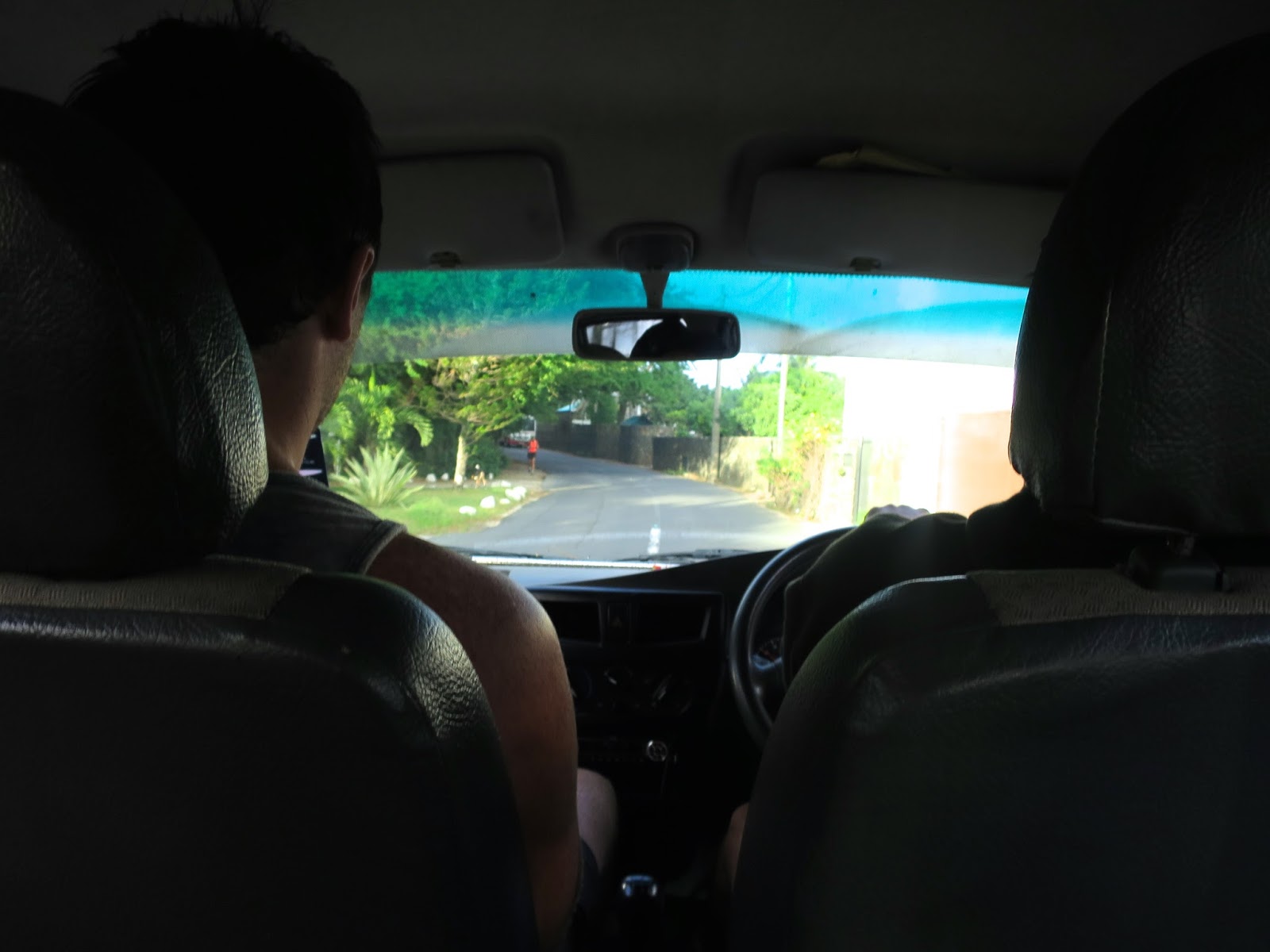 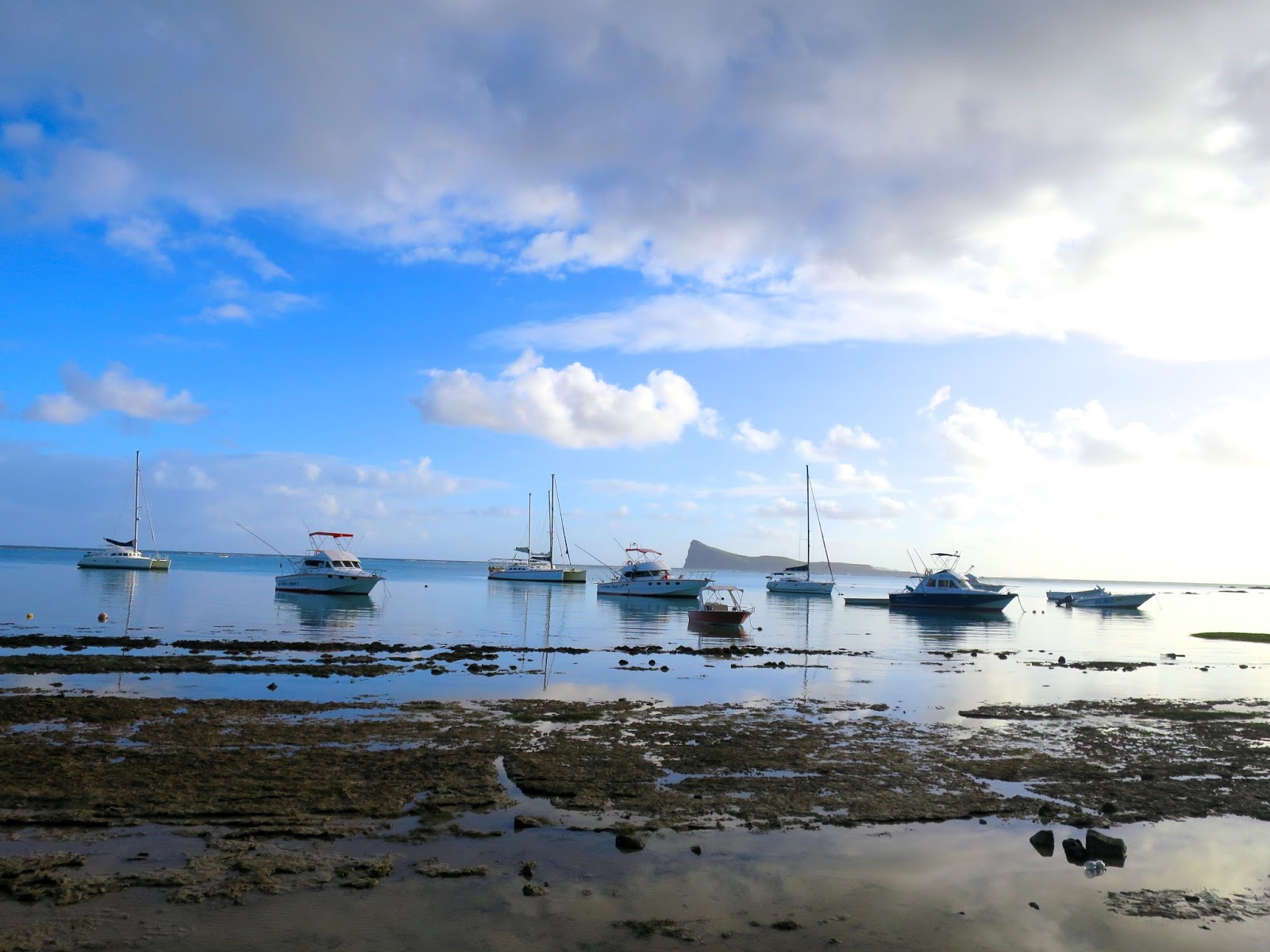 So we pulled up at the harbour and I looked around in the search for our boat. I’m not going to beat around the bush here. I had in my mind a yacht. A dazzling white yacht, not necessarily huge, but small and beautiful with a deck on the front where us girls can sunbath. I’m not being a snob here in the slightest, and I know I’m sounding a bit snobbish but it’s not like this trip was cheap. We paid over £500 per couple for 7 hours on the boat, so yeah, I wanted a pretty boat to spend my day out of the resort!

We were greeted (I say greeted, we didn’t even get a hello), by two fishermen who led us through the mud to our tiny boat. Once on board, they didn’t even introduce themselves or allow us to do the same, but quickly went on with their business like we weren’t even there. One of them started up the boat, and the other got the rods ready for the fishing. The only area of the boat which was in the sun was the small area where the rods were to fish, and the rest was under cover. Gutting when it was such a beautiful day and I quickly realised I wasn’t going to be enjoying the sun at all. 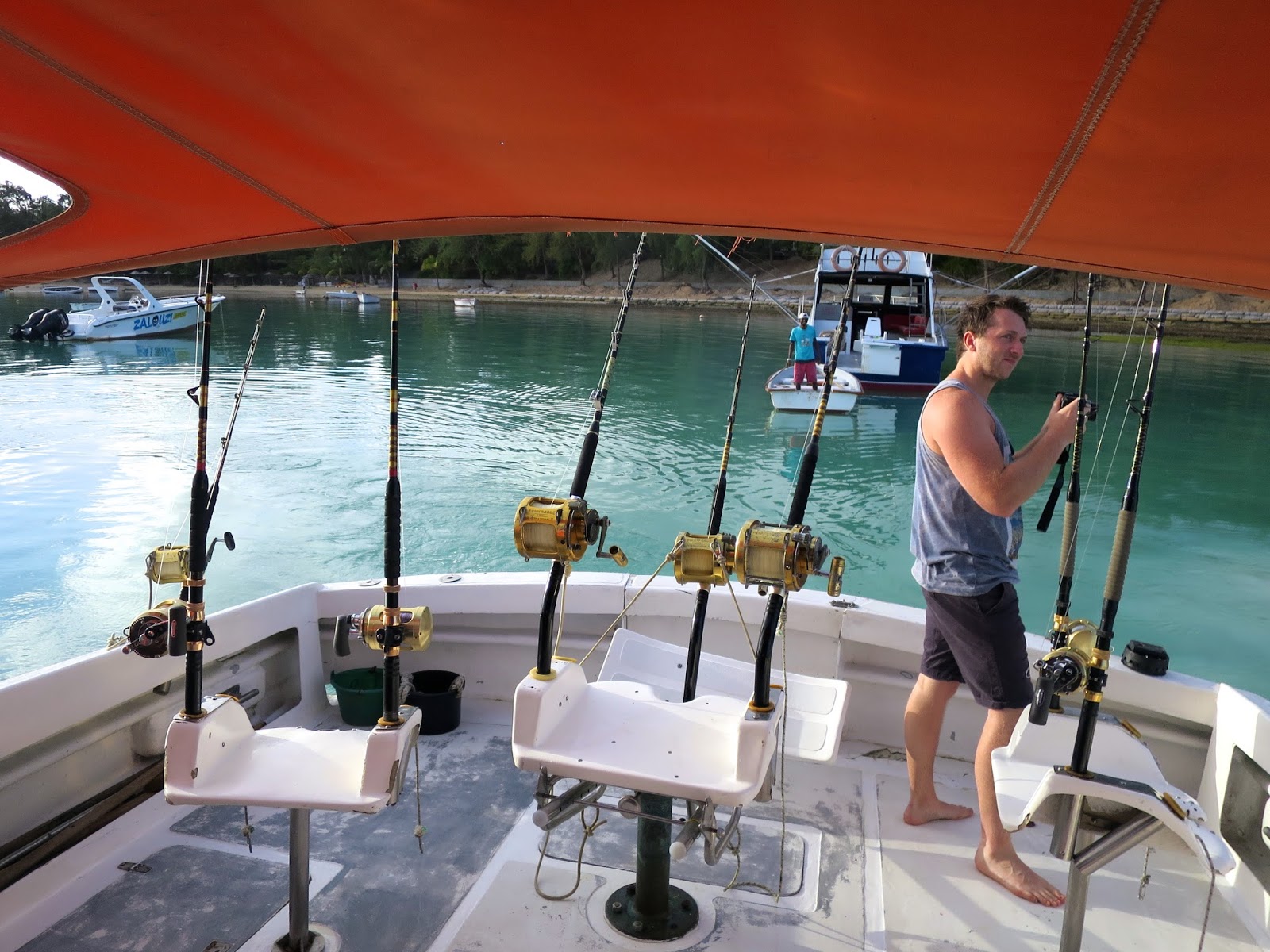 We sat around the small seating area inside the boat as it made its way off into the ocean. The rocking quickly began, and now I understand why the waiter was insistent about how dangerous it is. Holding onto the side of the chair to stop myself from falling, I looked out of the window and began to feel my eyes closing. It was the weirdest feeling, despite trying my hardest, I physically could not keep my eyes open. Before I knew it, I was out. 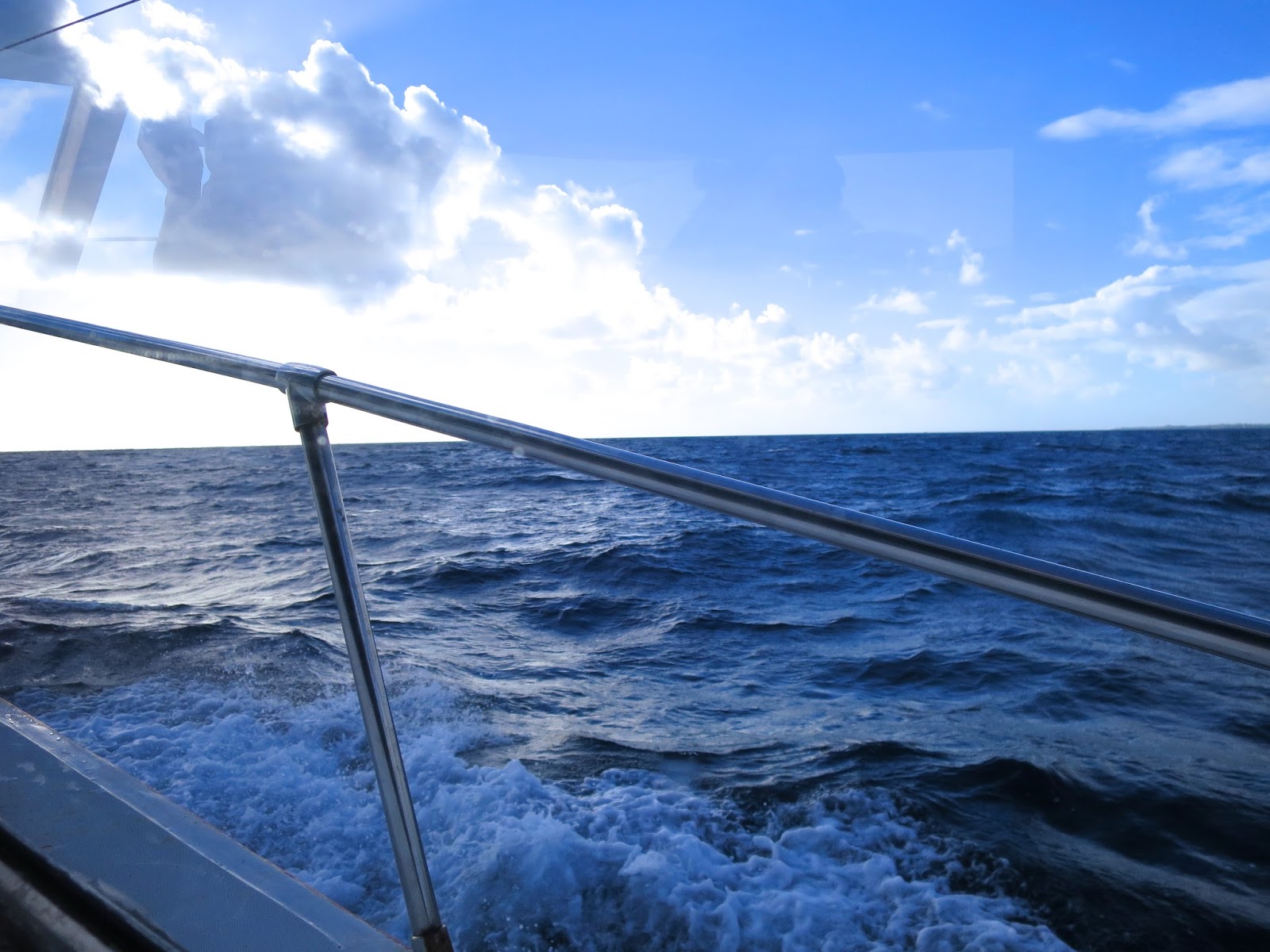 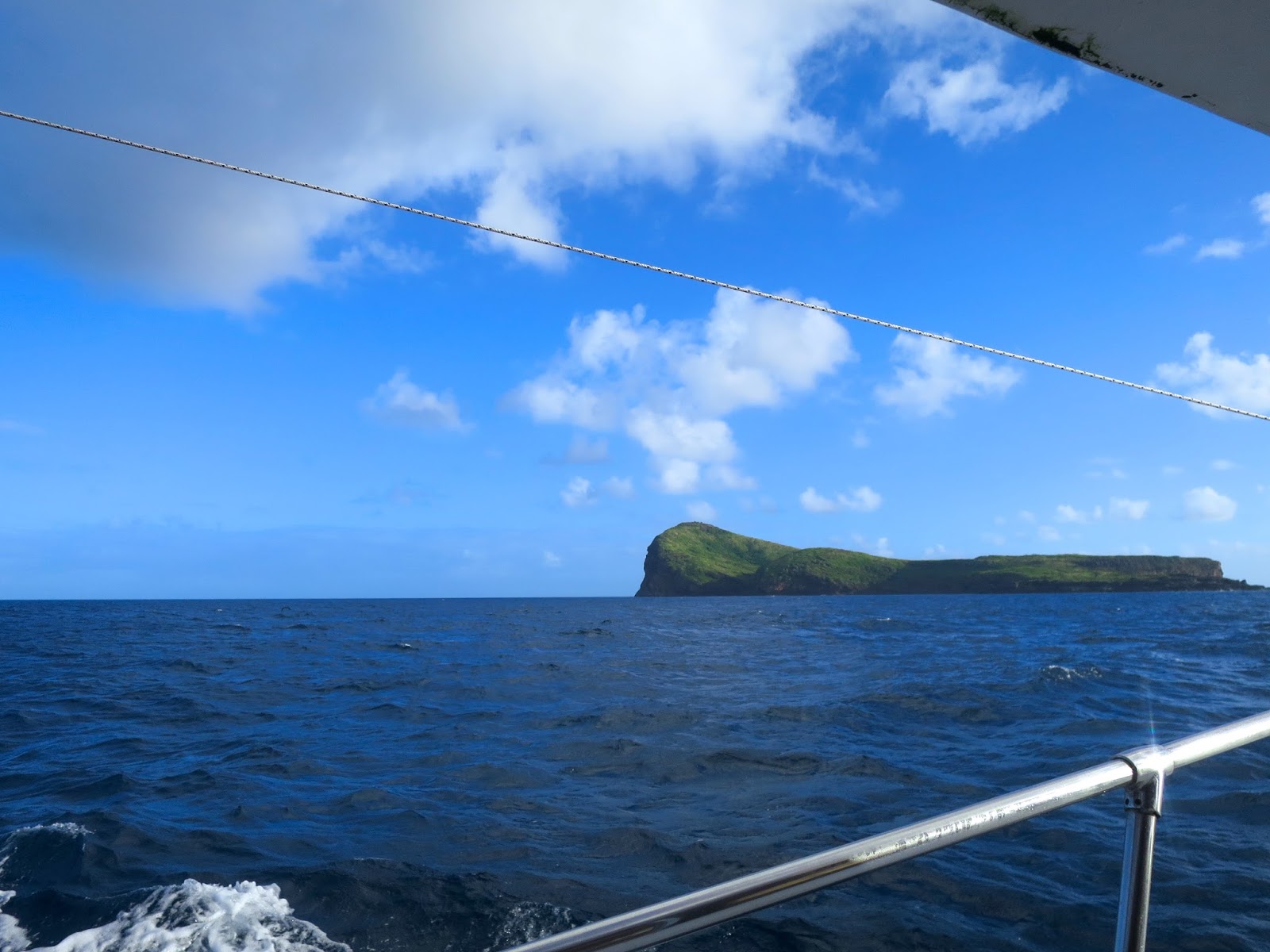 What we weren’t told was that the sea sickness tablets were drowsy, and I had taken two instead of one. I laid my head on the side of the boat and fell asleep in between my head banging onto the side every two minutes due to the choppy seas. I woke up at one point and noticed everyone, apart from the two fisherman, asleep!! The tablets had knocked us all out!

The boys were woken from their drowsy sleep every now and again to the alarm of the fishing rod going off to tell them they had caught something. Thankfully, the fishermen allowed the boys to sit on the chair and reel the fish in themselves, otherwise the trip would have been totally pointless for them! I’m laughing now at the image of us all waking up in  a drowsy panic each time the buzzer went off, and the boys half asleep stumbling to the rods, bashing into the sides of the boat because of the current. I wanted the boys to have lots of photos of them fishing so I grabbed my camera and tried to take as many photos as possible whilst holding on for dear life and trying to keep my eyes open at the same time. 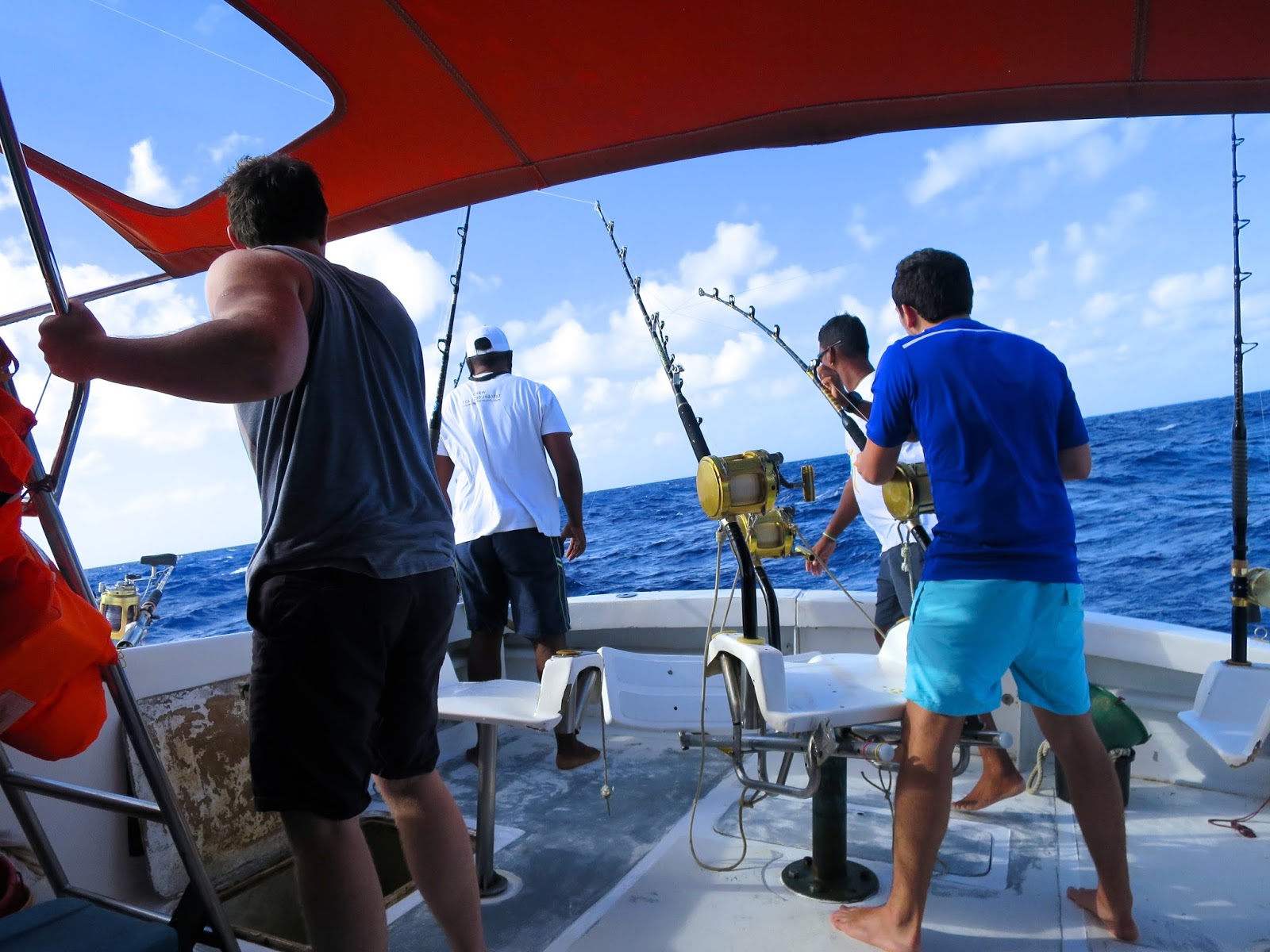 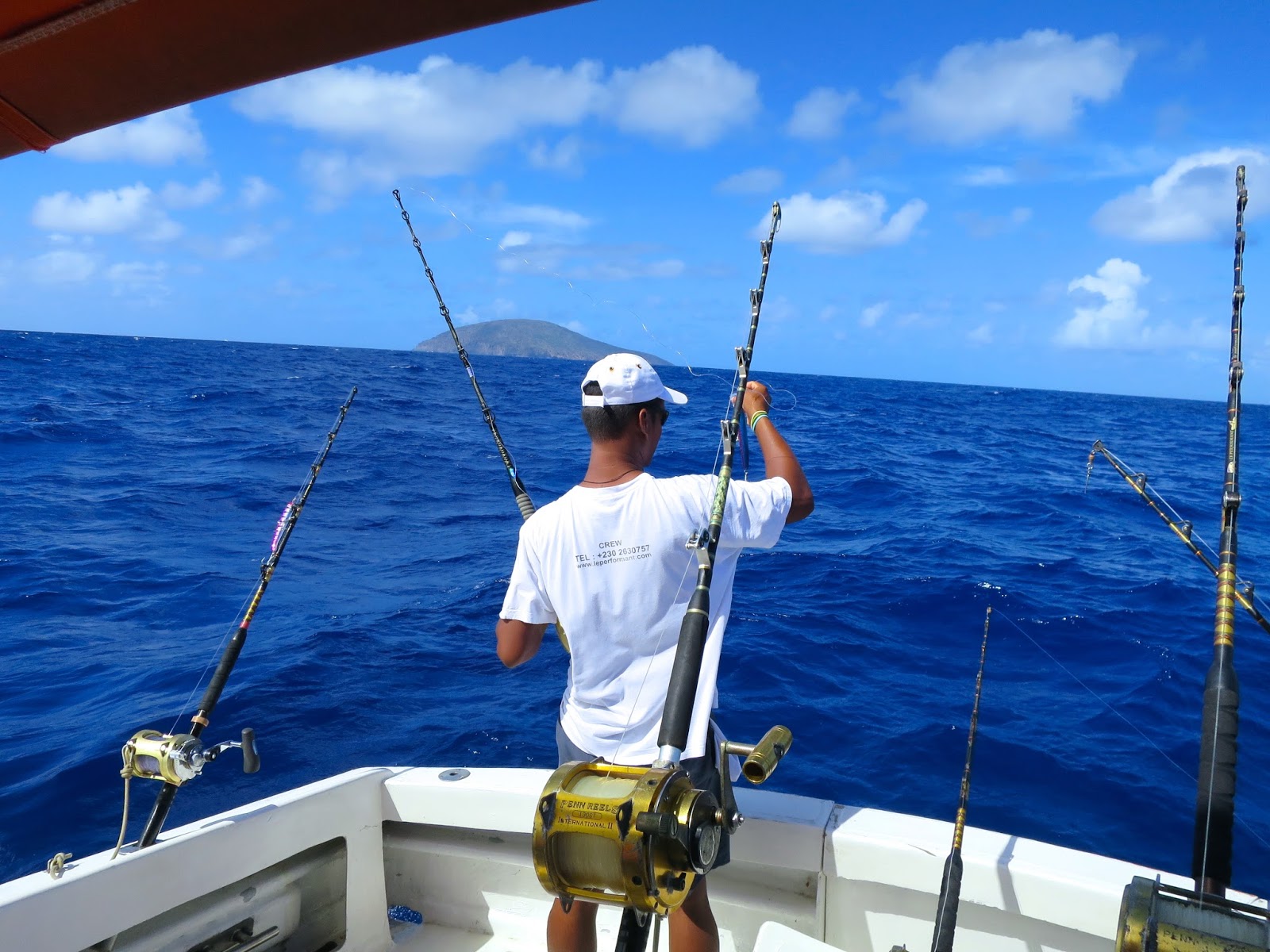 Around 5 hours after we had first set off, we were all still out cold asleep. I woke up to my belly rumbling and realised it was about 1pm and we hadn’t eaten all day. I woke the others up and reminded them about the BBQ that was promised when we booked the trip. The boys politely said to the fishermen “we were told BBQ lunch is included, what time roughly will it be?”, and I’m laughing to myself about what happened next.

The man didn’t verbally respond, but turned around, picked up a bowl of tuna that was left on the side in the warm, plonked a knife in it, and handed it to the boys along with a loaf of baguette.

I’m laughing now (not at the time), because I remember the vision I previously had in my head of a yummy BBQ with salad and burgers was so far from reality.

I’m not a fussy eater in the slightest, I will eat anything. Anything except tuna. I’ve tried it many times and tried my best to love it, but I just can’t stand it. Just my luck this was the one thing that was on offer for lunch. We didn’t even have plates, and I’m laughing again at the image of the boys sawing the baguette in thin air, crumbs going everywhere!

The others love tuna, and they couldn’t even manage more than a few bites. So we all went hungry. 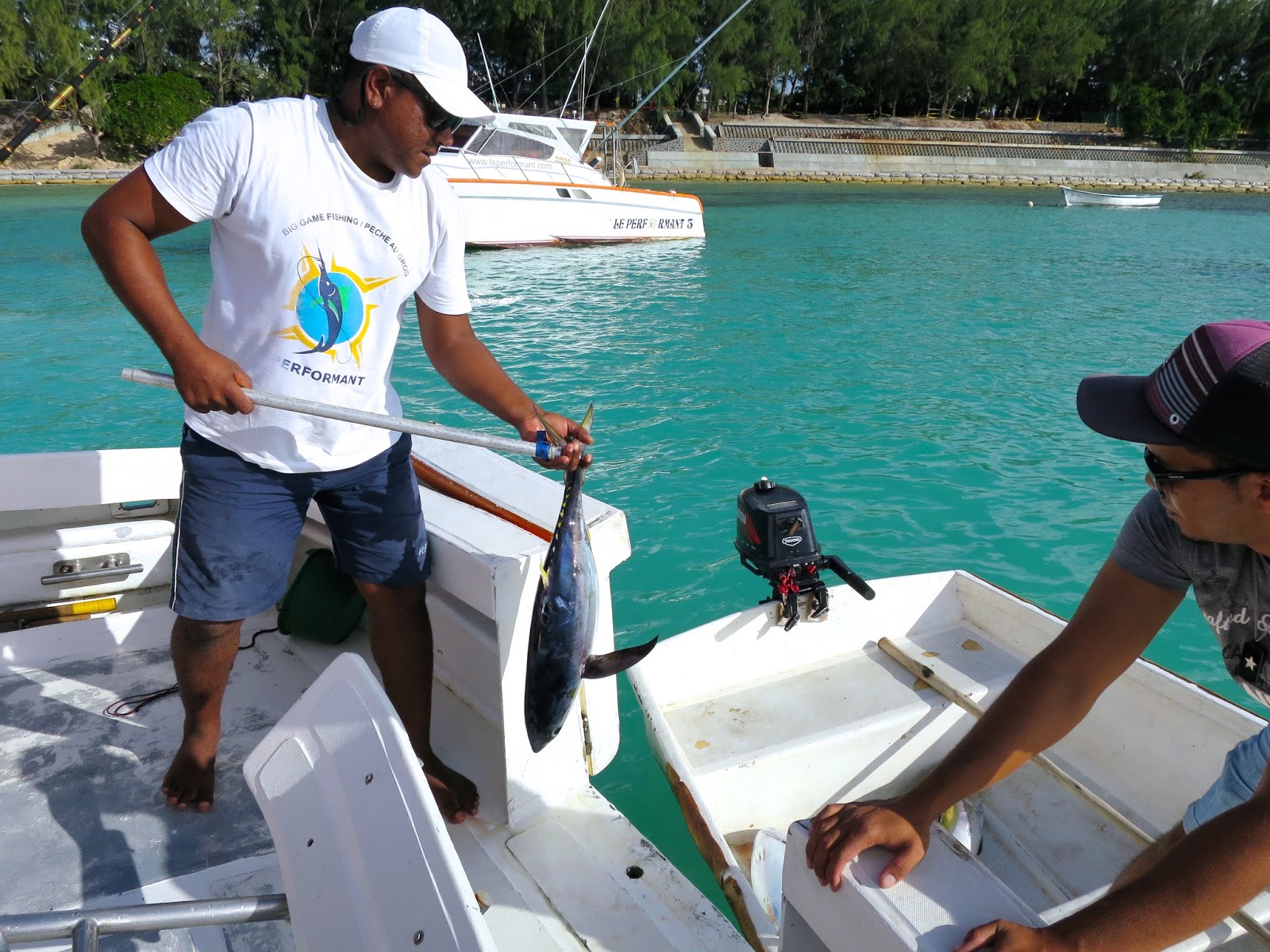 Fishing wise, the boys were happy with what they caught. There were no marlin unfortunately, but we caught a dorado which is the local fish in Mauritius and apparently quite rare to catch. We also caught tons of tuna. We assumed we would be able to put the fish back into the sea afterwards, but we didn’t realise until we witnessed then and there that the fish were clubbed and thrown into a trap after every catch. A bit shocking to witness to say the least, and in my opinion not a very humane way of killing them. We asked why they were bringing them back, and they said the fish will be immediately sold on to fishmongers. I guess this is their job and how they make money, but we would have liked to have been told this before arriving so we were aware!

After 7 hours of being on the boat, we finally arrived back to the harbour and I could not wait to get back to the resort.

We watched as a small motor boat pulled up beside our boat and the fishermen threw the dead fish from the trap onto the boat. As we watched, we all said to each other, I wonder where our boat is to take us back to the shore? It never arrived and we were then ushered onto the same boat as the dead fish!!! Once again, this situation never appeared in my previous visions of the day! 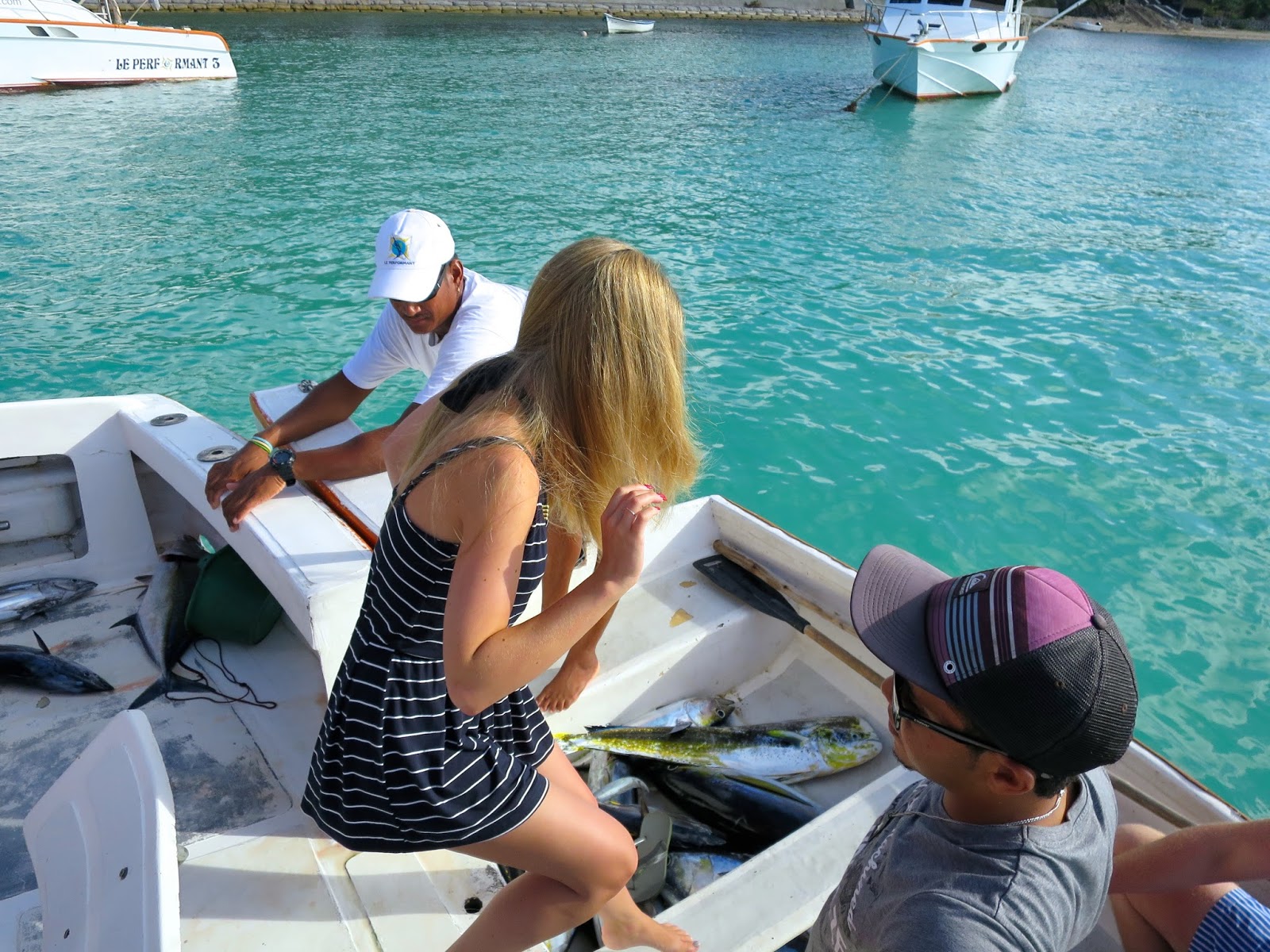 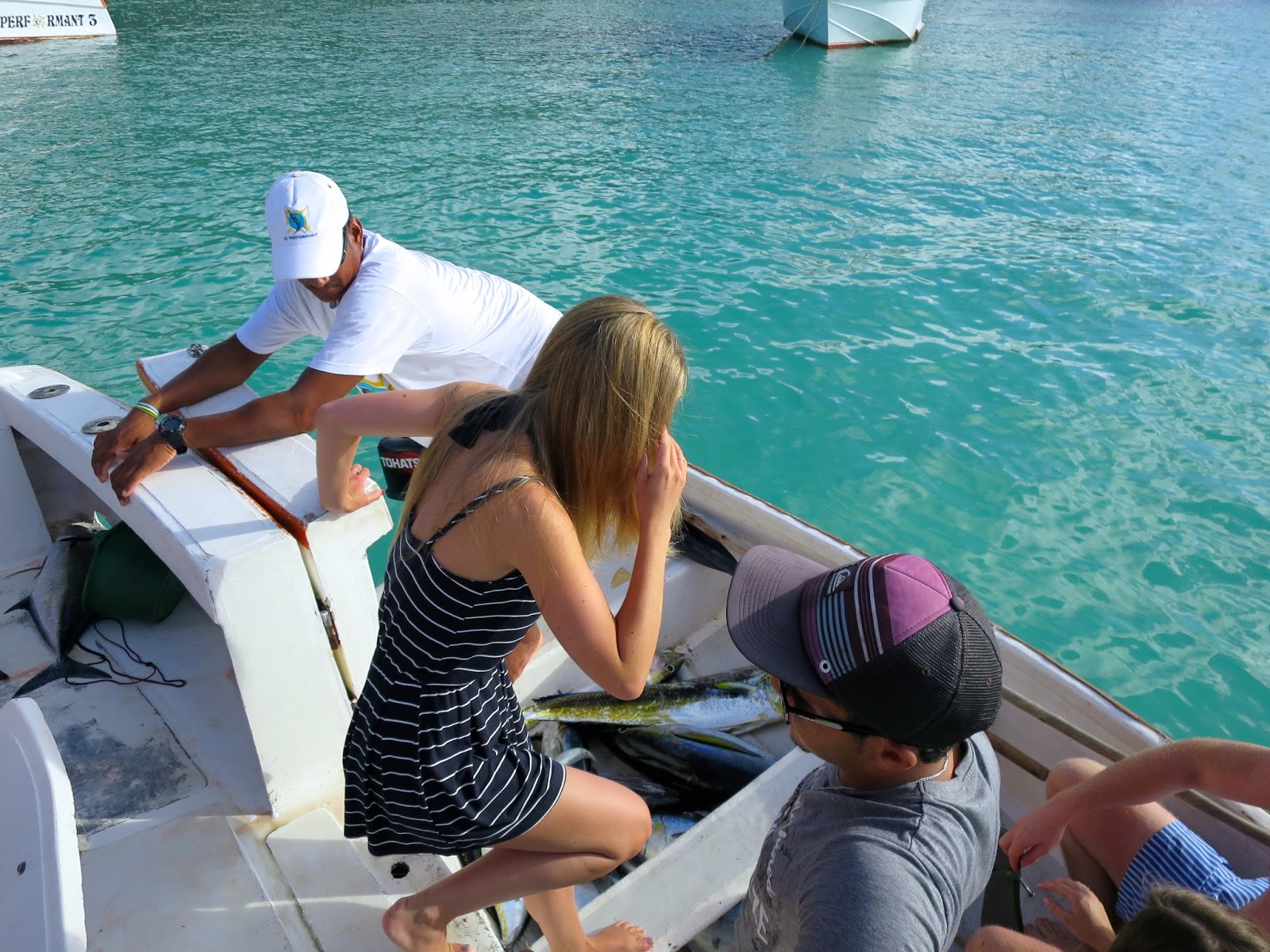 There were fishmongers waiting on the beach as we arrived, and they immediately took the fish there and then. We just about had time for a photo with the fish, something I wasn’t too keen about but being a good girlfriend I eventually agreed! 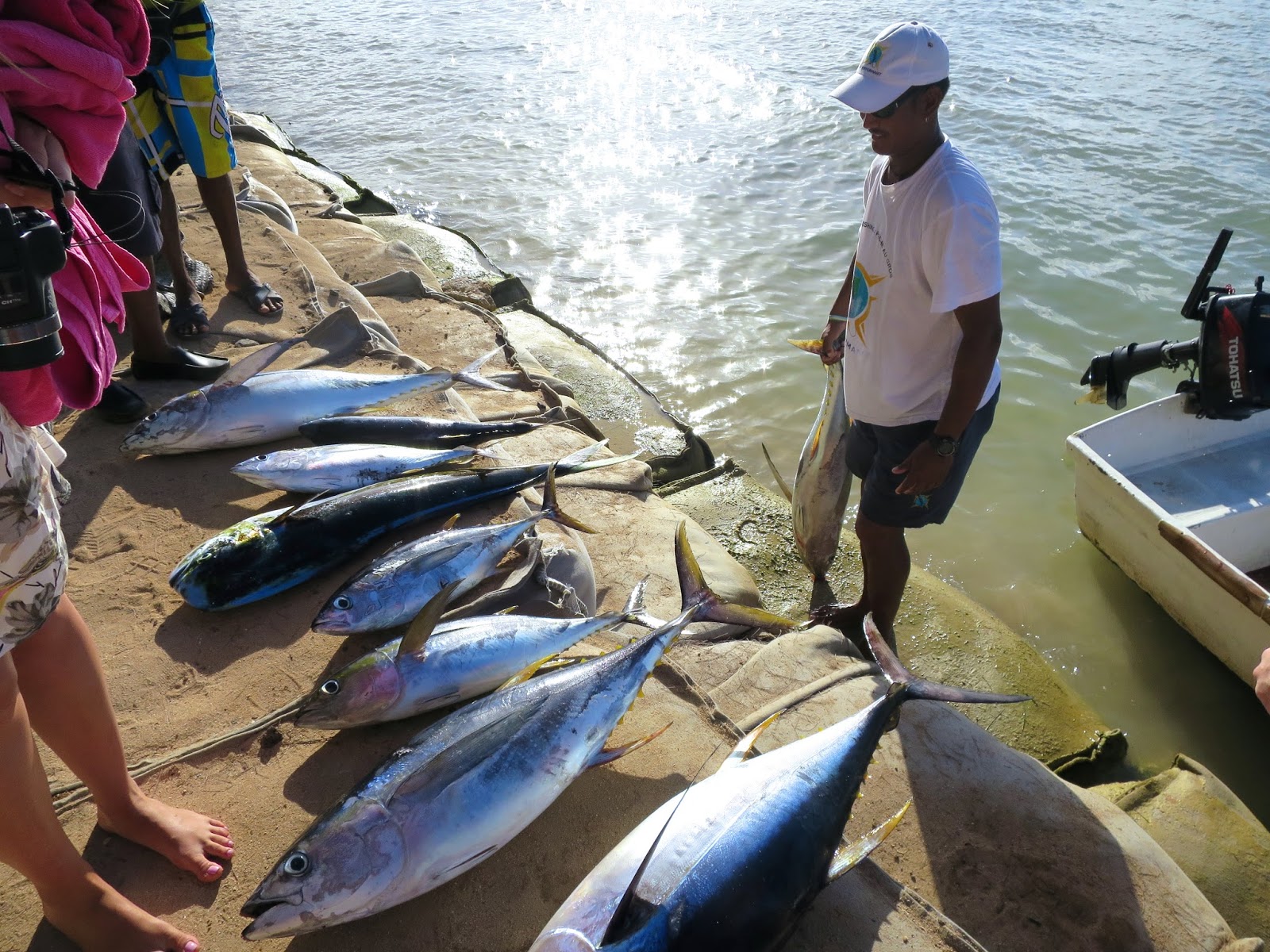 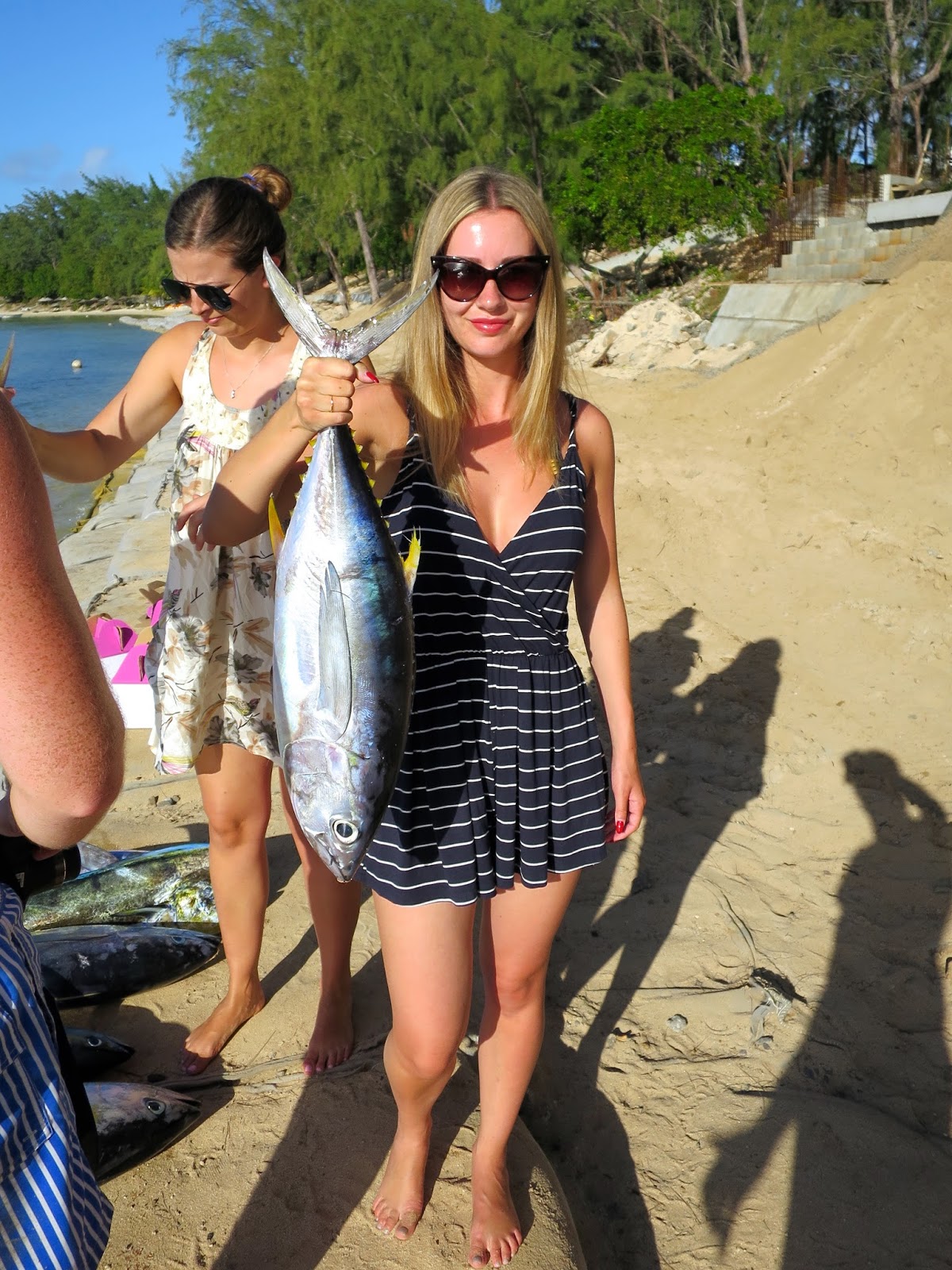 You know that moment when you’re trying to hold a giant, heavy, smelly, slippery fish but the wind is blowing your hair? Yeah, that happened. Totally relatable, I know! 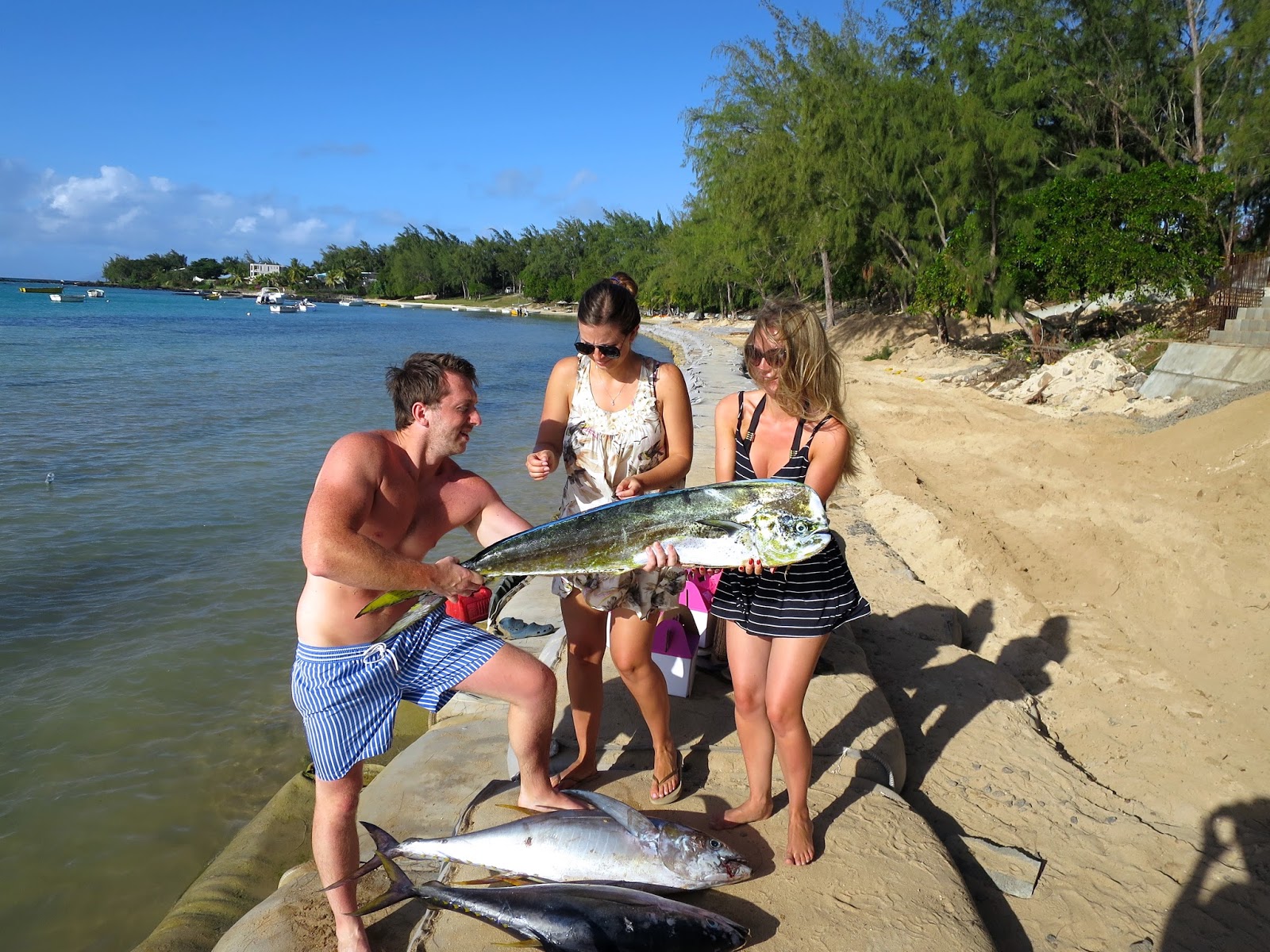 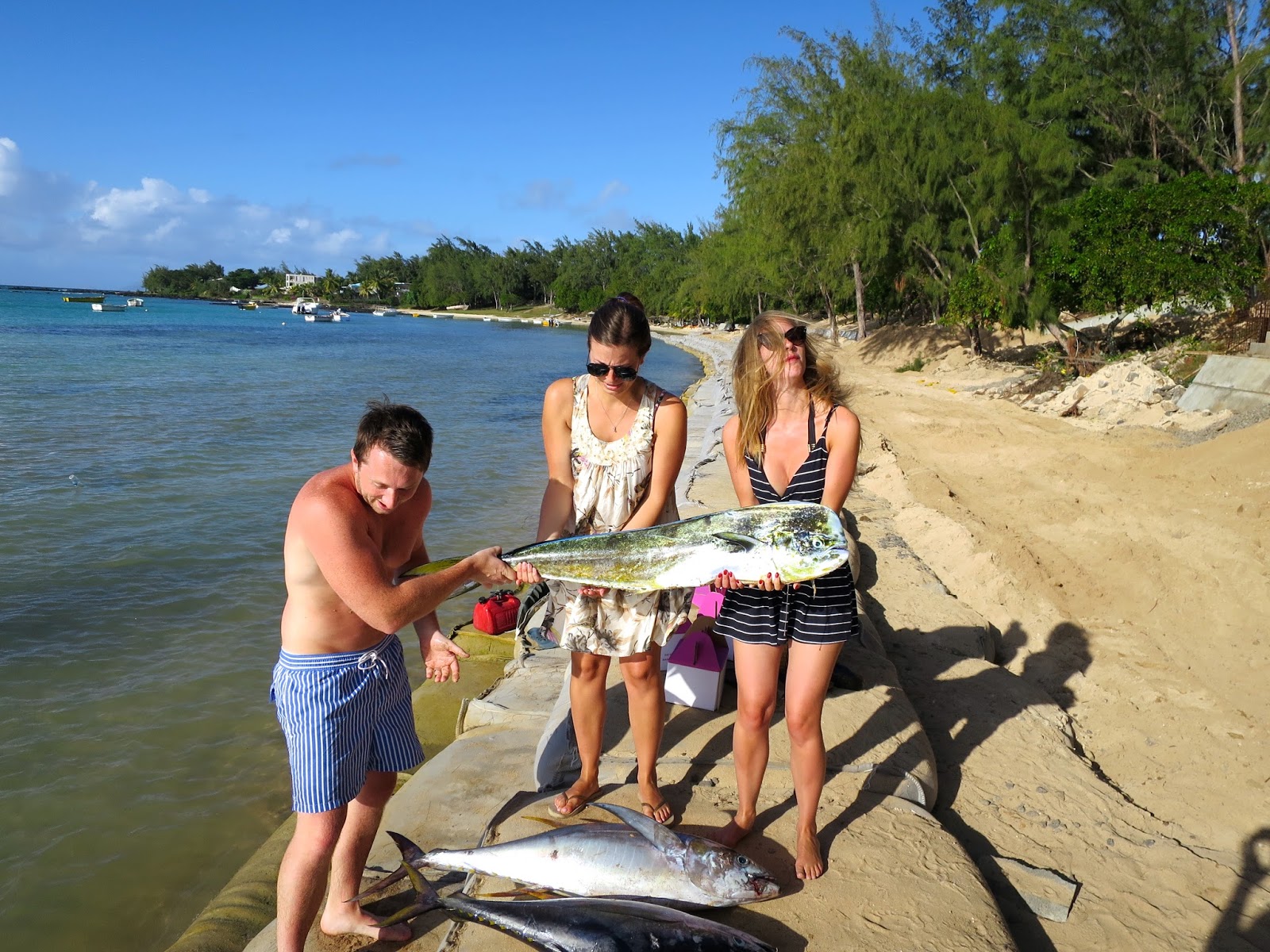 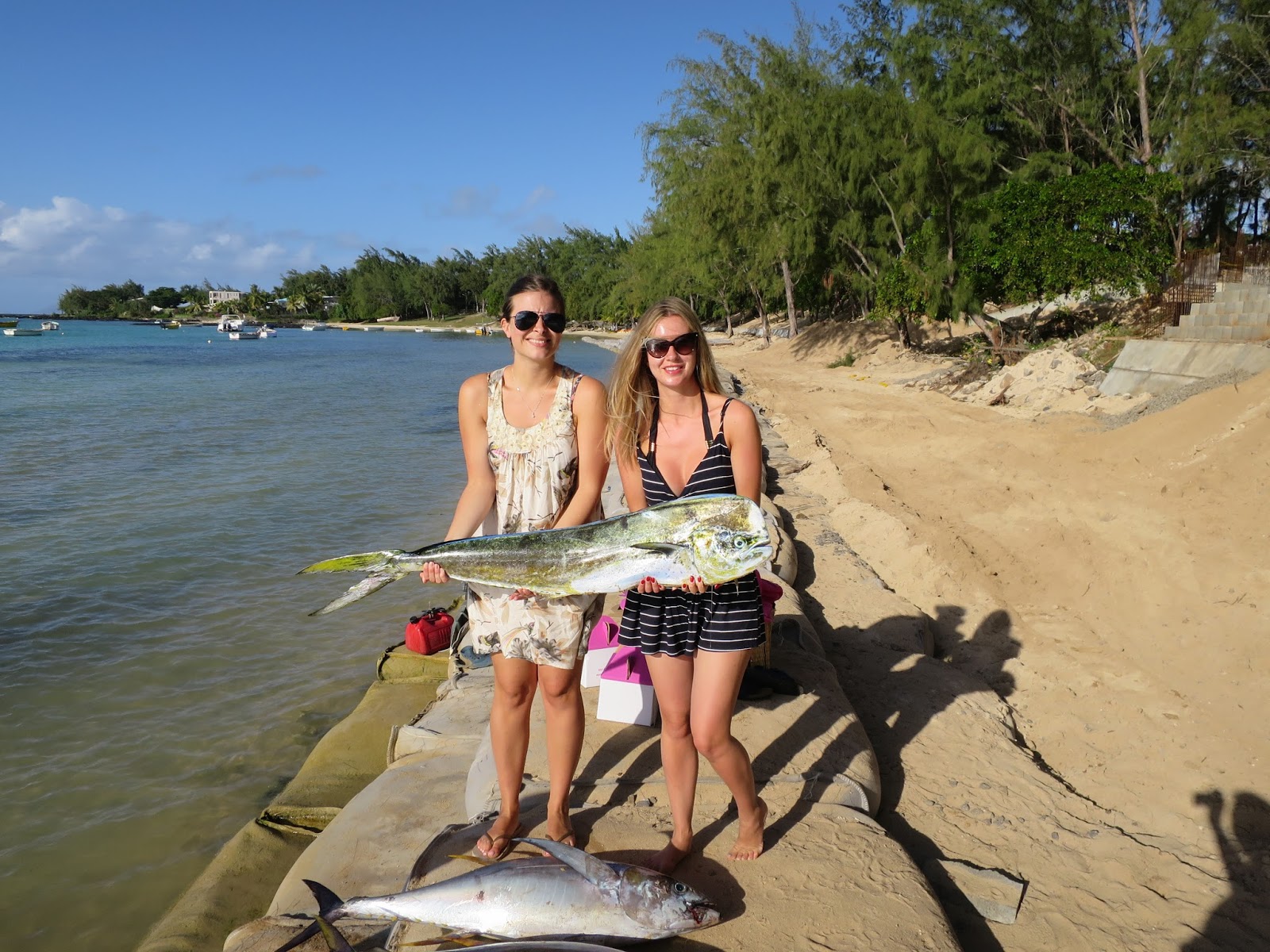 We were all so relieved to arrive back to the resort. That evening, my head was still rocking throughout dinner and we had to go back to the room early!

Although it was what you would call a bit of a disaster (not just the trip, but the fact we were fast asleep 80% of it!!) and totally not what we expected when we booked, we were able to make light of a bad situation. Even in the tiny boat with our bare feet on top of dead fish, we still managed to laugh about it. They chucked our flip flops on top of the fish and one of them landed in the fish’s mouth. At that moment, I didn’t know whether to laugh or cry, but we chose to laugh! Even though it wasn’t exactly what we imagined, it was still an adventure, and makes a pretty funny story too.

I can’t remember for the life of me what the fishing company were called, but I will do some research and add it onto this post in case you’re planning a trip to Mauritius and want to know. I’m not knocking it at all as everyone has different expectations, just take my advice, don’t expect a yacht, bring your own lunch and don’t take drowsy tablets!